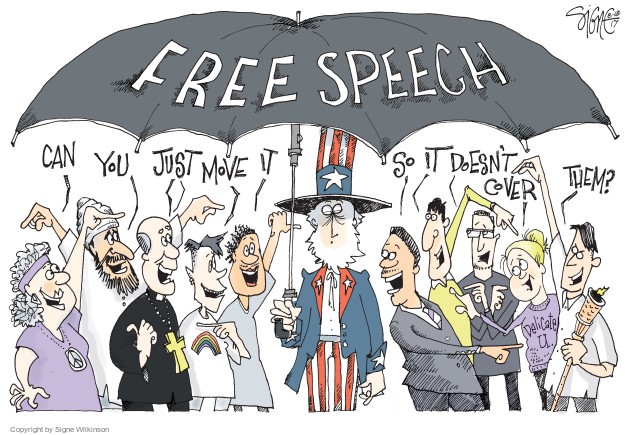 Dousing the “Fire in a Theater” Argument

Home » Dousing the “Fire in a Theater” Argument

Over the past few weeks, the corporate censorship apparatus has kicked into high gear, not only deplatforming a sitting US president, but also torpedoing alternative social media that offer their users freedom of expression. Predictably, media pundits and wannabe constitutional scholars justified these crimes against a once-cherished right with that old chestnut: “Free speech has limits; you can’t yell fire in a crowded theater.”

The much-misused phrase originated during World War I in a US Supreme Court case, when Justice Oliver Wendell Holmes used it to argue that an anti-war pamphleteer should be put in jail for opposing conscription. Even though the pamphlet didn’t advocate violence, the state won the case. But the Court eventually came to its senses, and overturned the ruling in 1969. You can read more on this interesting historical episode here.

Regardless of the fact that there was never a court case on “yelling fire in a crowded theater”, (at least, not one that challenged the First Amendment), this line still gets trotted out to end debates on freedom of expression. But it’s quite easy to poke holes in this “argument.”

The first and most obvious rebuttal is that if there is actually a fire in a crowded theater, it is acceptable to yell “fire.” Even Justice Holmes acknowledged this; his phrasing included “falsely yelling fire.”Just as with slander and libel laws, truth is a perfectly legitimate defense, even if making the statement may cause some harm. In other words, people may be injured in the ensuing panic to flee the theater, but that’s a lot better than all the patrons dying of smoke inhalation. Likewise when it comes to defamation, the potential harm from allowing lies to go unchallenged carries more weight than the risk to a person’s reputation.

Even if it turned out that there was no constitutional protection for inciting people to panic with a falsehood, that is rather beside the point to freedom of expression. A corollary of this is that an assault typically involves speech (e.g. “Your wallet or life!”) but we all understand that it isn’t the content of the utterance that constitutes the crime. However, those who justify censorship with the “yelling fire” chestnut are usually decrying what a person has said and have not bothered to investigate what the person’s intent of saying it was. In other words, they want to quash “bad” ideas, rather than simply punish malicious intent.

This of course leads to a very slippery slope, so the second obvious rebuttal is “if you want to prevent people from sharing ‘bad’ ideas, who gets to decide which ideas are ‘bad’?” Once you accept the notion that some ideas are so toxic as to be unspeakable, there’s no non-arbitrary place to draw the line between toxic and dangerous-but-acceptable. There will always be a struggle in the culture as to what constitutes acceptable speech; allowing the government, the ruling class, or Big Tech the power to censor gives nukes to one side in a fight that was previously being carried on with wooden swords.

But even atomic weaponry can’t eradicate ideas, and that’s what is so myopic about the push for censorship. The truly bad ideas just hide in fallout shelters and fester with their hatred of the world, re-emerging later in a more violent or extreme form. So whether the bad idea is white supremacy, Islamic terrorism, or Maoism, are a sure-fire way to radicalize the people who hold these ideas is to tell them they can’t open their mouths in public. They’ll retreat into their ideological silos, consume content from the internet that confirms their worldview, and never have their ideas meaningfully challenged by people who hold opposing views.

The censorious folks often liken bad ideas to viruses, ones so contagious that they can infect others with a single tweet or meme. But this analogy profoundly misunderstands how people come to adopt the worldview they hold. As someone who is in the business of trying to get people to change their political views, I can tell you that it is extraordinarily difficult, and never happens quickly. Infectious ideas are a myth, and even if some exist, the best defense is a healthy intellectual immune system: a willingness to look at evidence, and use reason and civil debate to discern fact from fiction in an open marketplace of ideas. The fact that our culture does so little nowadays to cultivate these skills that are so necessary to a free and peaceful society is the real reason that scare-mongering about “hate speech” and calls for censorship have gone off the charts.