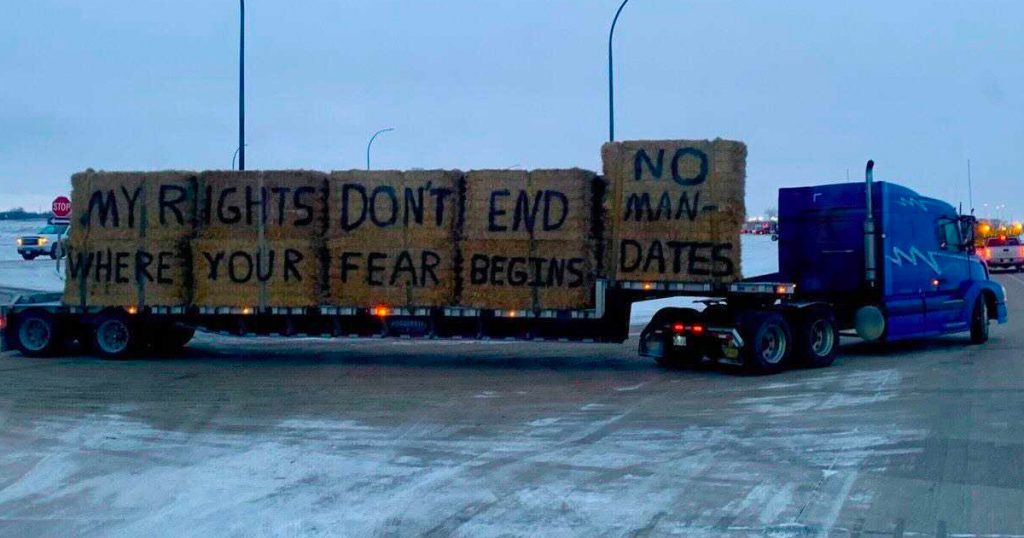 BC Libertarian Party Calls For Businesses to Revolt

Home » BC Libertarian Party Calls For Businesses to Revolt

We are united in our anger against the extension of the Vaccine Passport program. We have stated publicly that they were wrong for almost a year. It was clear that they were never intended to expire and were never intended to stop the spread of the virus, but to increase uptake of the vaccine and keep the population in a state of fear.  The BC provincial government and health authorities lied about this when they initially announced it several times.  There is clear evidence that the vaccines are not effective, gave false hope, and the government doubling down on this narrative at this point shows a clear lack of understanding of data and science.(source https://www.lifesitenews.com/news/vaccine-passport-just-an-incentive-and-not-about-health-vancouver-medical-officer/).

“Maybe I can answer this question briefly,” she said [Patty Daly]. “The vaccine passport requires people be vaccinated to do certain discretionary activities such as go to restaurants, movies, gyms not because these places are high risk. We’re not actually seeing COVID transmission in these settings.”

There has been no evidence that vaccine passports (or cards as they are now calling it) have had any effect on the spread of the virus.  With the spread of Omicron it has become clear that the virus has mutated in ways that have severely limited the effectiveness of vaccines, if there ever was any.

“I spoke in front of 50 business owners 2 weeks ago.  They are fed up.  They are tired of not knowing what order or mandate is coming around the corner. They know that the government is in reaction mode and is grasping at straws.  I told them that they need to unite in non-compliance en masse to show the provincial government that they know how to run their businesses better than bureaucrats and health officials in their ivory towers. The health officials do not see what they are doing to people, how much harm they are causing.  It is time for businesses to revolt. I’m calling on every business that is closed to open, today. I’m calling on every restaurant owner to refuse to check vaccine passports, today.  Not just for one day, but every day. We have tens of thousands of truckers driving to Ottawa to stand up for our freedom.  It’s time the rest of us do the same.  The provincial and federal governments do not have the authority to impose these restrictions on us. The only reason they think they can is because we continue to comply while they trample on our rights and put boots on our necks.  We need to stand together now.  The government is in an endless feedback loop of opinion polls driven by the propaganda they created by opinion polls. They do not have the moral authority to be making any decisions for the citizens of British Columbia.”  Keith MacIntyre, Leader BC Libertarian Party

For two years the government has taken our lives and freedoms away, telling us that if we just ‘do our part’, everything will be OK.  It is abundantly clear that the decisions they are making are harming more people than ever could be saved.  In 2021, 5,700 more people died in BC than in 2019. That’s 15%.  That’s 15 people every single day dying that would not have.  (source Deaths – Province of British Columbia (gov.bc.ca)) This is overdoses, lack of preventative care, surgeries cancelled, alcoholism, addiction, overdoses, isolation, depression and this is only the beginning of the horror story that will unfold over the next decade.  Every step of the way they have lied, skewed data, and tried to ‘protect’ us.  They had 2 years to plan for the worst case and they have only made our healthcare system worse. What a slap in the face to the workers who were touted as heroes for so long, only to be fired for making the ‘wrong’ decision once a vaccine was in place. These bureaucrats, who have never missed a paycheque or collected CERB or made difficult choices to keep their staff employed, are not fit to lead our communities.

“I am encouraging citizens to protest at MLA’s offices, their homes, and to force them to resign so we can replace them with real people, who actually care about people’s lives. I’m encouraging every person that took 2 shots because they thought it meant they could get their lives back to stand up and say ‘we will not take this any more’.  It is time that we hold them to account and investigate them for the deaths that they have caused.” Keith MacIntyre

Keith is a CDC trained pandemic modelling and simulation expert. While writing training software prior to H1N1 he was privy to pandemic training scenarios from across North America. All provinces had written emergency plans prior to the declaration of the pandemic and didn’t bother utilizing them (see David Redman Dec 2020 https://c2cjournal.ca/2020/12/every-store-and-school-should-be-open-confronting-the-pandemic-with-confidence/) ; field hospitals were erected but then never used for the highly contagious covid patients, premiers and top doctors across the country including Bonnie Henry unequivocally stated that vaccine passports would never be implemented but then weeks later were accepting federal transfers to implement passport systems; we’ve been told that we must manage COVID with masks and social distancing and not seeing our loved ones to prevent a burden on the healthcare system but how many new staff were hired and how many new beds were created in the past two years?

To quote the last surviving architect of the Constitution, Brian Peckford. What the government has done is illegal. We must unite in non-compliance, and we must do it now.