How to resist the Vaccine Passport System

***UPDATE, June 12, 2022*** BC Doctors have filed a petition against Bonnie Henry and the Attorney General of BC.  The Canadian Society for Science and Ethics in Medicine has been preparing for many months to fight the vaccine mandates against health professionals in BC.

“As a result of the Order, health care workers who have chosen not to receive a vaccination have been prevented from continuing to provide services to their patients in these settings and, in many cases, have faced the termination of their employment.

It is self evident that such an Order, which requires individuals to submit to medical treatment against their will or face a loss of their employment, has significant negative consequences on the interests of the affected health care workers who, for a variety of legitimate reasons, may be unwilling to be vaccinated”

The BC Libertarian Party wrote political beliefs exemption letters for dozens of employees being threatened with losing their jobs for their medical choices. 5 brave individuals have chosen to share their stories. Forcing a medical treatment on someone under threat, force and coercion is wrong and violates our core Libertarian values.

1. That no individual or group is permitted to initiate the use of force or fraud against any other,
2. That the universal natural rights to life, liberty, property, expression, and the peaceful pursuit of happiness are essential to the preservation of civil society
3. That the role of government is to protect and preserve such rights, and
4. That the citizens of British Columbia have the right to defend and be defended from those persons or institutions that seek to diminish any of the above principles.

We are the only Provincial Political Party that has been speaking for freedom since 1986 and has been against mandates and restrictions from the very beginning.

Governments should not be forcing medical treatments on their employees or citizens.

Courtney – Fired by an Okanagan Winery
Morag – CT Technologist seeing concerning trends in the hospital
Cory – Pregnant mother threatened with not allowing her husband in the delivery room
Heather – Homeless Shelter worker. Resigned rather than take an injection.
Robert – Dentist under threat of not being able to practice.

***BREAKING, October 6, 2021*** The latest Open Letter to Dr. Henry, Adrian Dix, John Horgan and Attorney General David Eby is now available. This document was created by a group of BC Professionals including doctors and lawyers. Share widely. Click here.

You know that vaccine passports will do little to nothing to stop the spread of Covid-19.

You know that a system set up to collect and disclose your medical data to multiple other parties is a perfect target for identity thieves, nosy government agents, and other criminals.

You know that a system like this that allows some citizens to participate fully in society, while barring others from doing so, sets up a 2-tier society, where those who wish to preserve their privacy are treated like second-class citizens.

You know that once in place, a system that “rewards” citizens for making “good” choices and punishes them for making bad ones, will lead it to be used for other nanny state or authoritarian purposes.

You know that the government is lying when they say it’s just a temporary program.

The question is, what can you do about it?

1) When asked to show your vaccine passport, use the opportunity to educate others on what’s wrong with the system. You can show them an image that looks like the BC Vaccine Card, but has another message, or uses a QR code to link to one. Here’s one that reminds the establishment operator that you’re just trying to engage in a mutually beneficial transaction; but you can always take your business elsewhere if they choose to discriminate against customers who wish to maintain medical privacy. They may even just pretend to scan your passport and invite you in! 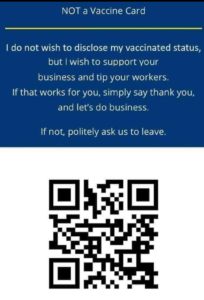 2) Patronize principled businesses that value all their customers. Find ones in your community with the Fully Open app, the BC Businesses Against Health Pass Facebook group, or the Save Small Businesses Telegram group.

3) Let businesses know how this system is hurting their bottom line. If there were businesses you patronized regularly before the vaccine passport was introduced, estimate how much you spent at each per month or week. Then, let the business owner know how much they’re missing out on by excluding you as a customer. You could also provide this information to your local Chamber of Commerce, Business Improvement Association, or municipal council, perhaps prompting them to plead to Victoria for an end to this commerce-killing regime.

4) Call or write your MLA: We know politicians are worse than useless when it comes to preserving the liberties of citizens, but if you can get it in writing from them that the government is committed to ending the passport system January 31 (which is very unlikely), then at least you’ve got their answer on record and can call them on it in February. You can also ask them why medical and religious exemptions were not included. Do they not believe in natural immunity to Covid-19? Do they not think that people with a history of adverse reactions to vaccines should be excluded from society? Use this link to find the contact info for your Member of the Legislative Assembly.

5) Support the legal challenge: The Canadian Constitution Foundation is launching a legal challenge against BC’s vaccine passport system for failing to allow exemptions for individuals who cannot be vaccinated for medical reasons. You can donate to the CCF (a registered charity) to support this vital effort.

6) Support the work of the BC Libertarian Party by donating, becoming a member, volunteering, or just joining our mailing list. We’re the only party in BC that’s standing up against vaccine passports, mandates, lockdowns, and all the other forms of creeping authoritarianism we’ve seen during the pandemic. We need your help to make the call for freedom louder.

For more on our position on vaccine passports and other issues, visit our blog.