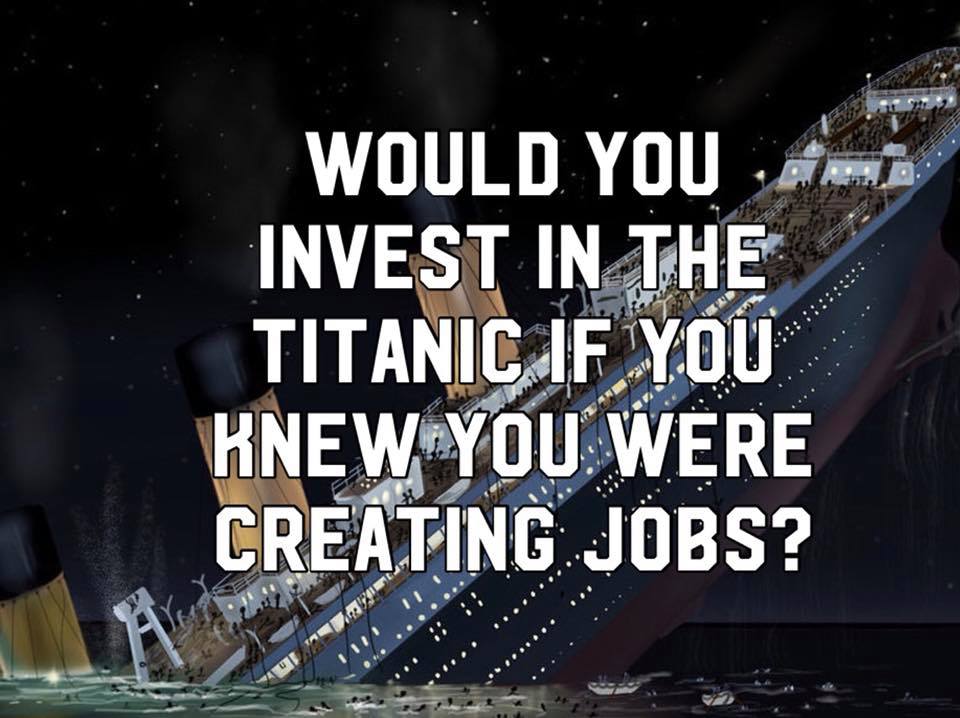 I love how checking facts make everything so clear – if we are willing to pay attention to them.

THESIS – both Conservative and Liberal governments dump billions to bail out Canadian corporations that have nothing to return. This is not capitalism. It’s welfare programs for companies – cronyism – where the backdoor deals are made for the benefit of the few, and tax dollars are siphoned out of the system to prop up companies whose executives and boards made bad business decisions. My argument is we should stop corporate bailouts altogether no matter who holds political power.

Fact 1. Bombardier was in serious trouble, and was granted provincial and federal government bailout money as part of a restructuring plan that would include 14,500 layoffs worldwide.

Fact 2. Bombardier has received over $2,000,000,000 in government money in the last decade, and the government has written off undisclosed sums in the past. The last $370 Million announced in 2017 was an interest free loan, even though the Canadian government owes interest. Because the amortization period is INDEFINITE, the interest on this amount is incalculable. When the only thing propping up your balance sheet is government loans, you’re in trouble.

Fact 3. Justin Trudeau February 9 2017, “We are pleased that this loan of almost $400 Million to Bombardier is going to create thousands of good quality middle class jobs across the country”

(He also said that approving the TransMountain pipeline would create 15,000 middle class jobs) Unfortunately, the illusion of job creation allowable with these loans did nothing to create jobs in Quebec, let alone around the world. This will be something politicians may want to consider in campaigning in 2019.

Fact 4. Within weeks of the bailout announcement, Executives at Bombardier gave themselves a 50% pay raise, which was later delayed until 2020 under intense public pressure and protest.

Fact 5. Swedish courts charge Bombardier with bribery and collusion with a project in Azerbaijan less than 2 months after the loans are announced.

Fact 6. Bombardier stock price has been muddled in ups and downs since February 2017 and is worth approximately the same today. They have burned through $370 Million in cash this last quarter. According to the Financial Post today, the only way they will produce a profit is to include the $650 Million proceeds of sale on their Toronto land. Net assets are -$11,672,000 USD.

The facts prove that the Federal government has no accountability in being wrong on their spending to bail out large “systemically important” companies. Their main claim to fame is that Bombardier still exists, but that’s like washing the dishes on the Titanic – the ship’s still going down bro.

What’s problematic is the decision-making process to invest in the private market, the corporate welfare system, and the siphoning off of billions of dollars of taxpayer money to this end means that the money collected could have been better used (or not collected at all) for other issues. This is a classic example of Keynesian economic miscalculation, where governments are responsible to step in and spend money.

A company that has more than $28 Billion USD in long and short term debts would take more than 65 years to pay these off if they paid $100 Million every single year. But for a company who lost more than $8 Billion in the last four years, that might take longer than Canadian taxpayers are willing to wait.