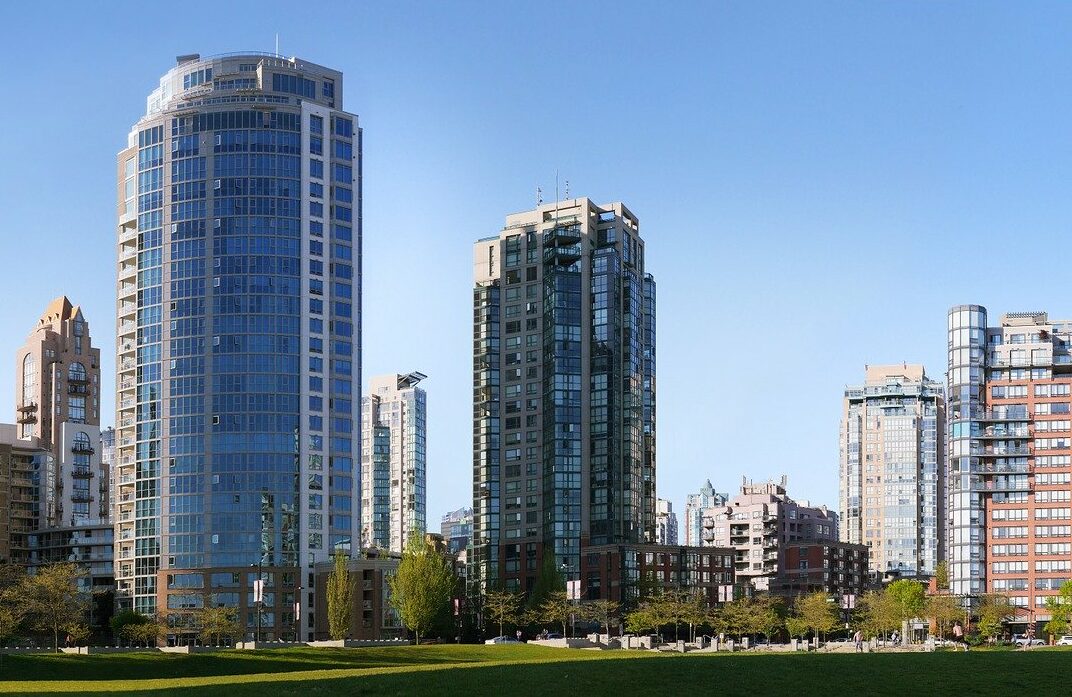 When we look at cost of living in BC housing is main one that makes the difference between people making ends meet, and not having a roof over their heads. It’s a major source of stress not just for those living close to the poverty line, but for many people at higher incomes as well. Making housing more affordable will give people greater financial security and the greater peace of mind that comes from having a stable living situation.

Why is housing so expensive in so many parts of BC, especially compared to other areas? There are several factors that drive the cost of housing much higher than it needs to be, and government policy and regulation is a primary culprit with each of them.

Land is a unique sort of good in that we cannot create more of it. This fact makes it more difficult to increase the supply of real estate, but by no means impossible. Currently upwards of 85% of BC’s territory is crown land and thus not available for development. Of the remaining land, a large proportion is in the Agricultural Land Reserve (22% of Metro Vancouver land is in the ALR), where residential development is forbidden. Limiting the supply of land in the private market drives up the costs of all types of development, including housing. If the provincial government were to transfer ownership of more crown land to municipalities, First Nations, community or non-profit land trusts, and private owners, we could expect the increased supply to reduce costs for housing, at least in some areas.

More significant for the cost of housing than the total supply of land on the market is the proportion that is zoned for residential use, and what types of housing are allowed by the zoning regulations. Even in BC’s most urban areas where there is a high demand for any type of housing, upwards of 80% of the land is zoned for only single family dwellings. Higher density forms of housing like townhomes and condos are typically confined to narrow corridors along arterial routes. The limited choice of locations for new multi-family developments increases their cost. Though city councils sometimes rezone single-family parcels to multi-family zoning, more often the result of such restrictive zoning bylaws is that older apartment buildings are torn down to make way for new condos. This seriously affects housing affordability because older apartments have a much lower cost per square foot than new condos, and more of them allow rentals.

Zoning bylaws contain other restrictions that preclude higher density, especially for single family neighbourhoods. One of these is the minimum lot size, which, in Vancouver for example, ranges from 3,000 to 18,000 square feet, which ensures a lower density of housing for the neighbourhood. Other such bylaws include banning laneway (or carriage) houses, limiting the footprint of the dwelling to a percentage (40% is typical) of the lot, banning or requiring permits for basement suites, and minimum house set back distances from the property line by a certain distance. Eliminating these restrictions would allow for greater housing diversity and density which would reduce costs.

The costs that go into a modern residential development go far beyond wood, concrete and other materials of the building. If city council approves a project the developer must first pay for a development permit. For a house or addition to one, this is in the thousands of dollars, but can be hundreds of thousands for larger multi-family projects, particularly if re-zoning is involved.

Because no developer is simply allowed to build what they want, the municipality has extraordinary leverage in the permitting process, and can require the developer to provide any number of public amenities. At minimum, these include streetscape improvements (sidewalks, street lighting, trees), but can also include public amenities like art, parks, plazas, community centers, childcare facilities, and libraries. Increasingly, developers are required to provide subsidized housing units which are rented out by BC Housing or an affiliate for below-market rates. Developers are also required to provide a certain number of parking spaces. The city planners may also have specific aesthetic requirements, such as the type of landscaping or building cladding. All of these add significantly to the cost of the project, and this translates into a higher cost per residential unit.

Once a development permit is granted, a developer must put together their design and apply for a building permit. As with the development permit, there’s a cost of tens to hundreds of thousands of dollars, and there’s the costs (for the architect, builder, or consultant’s time) of preparing documents and going through the review process with city hall. These and other compliance costs really add up, and as shown in 2017 study, can be as high as $40,000 in multi-unit buildings in greater Vancouver municipalities. But the biggest cost may well be that of time spent waiting for permit approval; several months to well over a year for larger projects is typical, and for Vancouver, 2 years is not unusual. As construction costs escalate and the developer incurs interests on loans taken out to start the project, such wait times add significantly to the final cost per unit.

Streamlining the permitting process would help, as Vancouver and other BC municipalities have stricter and slower and processes, and not enough staff to keep up with the number of applications. But to really get the costs down, a different model is needed, one that doesn’t allow city planners and inspectors to get so involved in the details of projects. One such model that has seen success in the US is that of private districts or neighbourhoods, whereby the developer or a council of homeowners takes over authority for land use decisions. Unlike the current arrangements where city politicians and developers make all the development decisions and reap all the benefits, in such communities, the resident owners have greater control over how and where development happens, and stand to benefit from it in the way that shareholders of a corporation benefit from investments in new productive capital.

Building codes specify, often in great detail, how a building must be constructed. Most of the provisions of these codes are ostensibly for safety but as with anything there is a trade-off with cost. There are also other provisions for energy efficiency, which may be a low priority for those just trying to put a roof over their heads. It’s very difficult to estimate how much building codes add to the cost, but some builders have estimated the additional costs just for energy efficiency in BC’s recent code changes to around $80,000. Building codes and the power given to building inspectors to interpret them narrowly also stifle innovation in design and construction, because they dictate not just the standard a building must meet, but how it must be built.

The system of building codes we have is a nested one, with a national building code at the top, then provincial and municipal ones below. The lower codes can be more restrictive than the one above, but never more liberal. A better alternative would be system of competing codes offered by governmental and private regulatory bodies. The development of each code would involve trade-offs between safety, design flexibility, environmental sustainability, cost, and other factors. Homeowners and developers could select a code that they think would best meet the needs of the project and its residents, and  would allow more low-cost housing to be built.

The Bank of Canada sets interest rates and controls the amount of currency in circulation. Like most central banks, the Bank of Canada has adopted a policy of low-inflation and low interest rates. By mandating that interest rates be lower than they would be if they were negotiated voluntarily be lenders and borrowers, the Bank of Canada discourages savings. Term deposits and the like yield such low rates of return that they can’t be used to save long term, because the devaluation of the currency (aka inflation, runs approximately 3% per year) means that even with compound interest, the purchasing power of the savings will be less in the future than it is today. To deal with this problem, people who have some savings but see the stocks or other asset classes as too risky typically look to invest in real estate. This leads to residential property being used as an investment vehicle more than it would be if interest rates found their natural level on a free market, which of course increases the demand and price of housing.

Another federal policy area driving demand in housing is immigration. Because the vast majority of the over 300,000 annual newcomers to Canada settle in greater Vancouver, Toronto and Montreal, the supply of housing has had difficulty keeping up with the demand in those cities. While immigration to Canada’s biggest cities provides and economic and cultural boost, the concentration of demand for housing in these urban areas, combined with the limitations on supply mentioned above, mean that as immigration levels have risen, so has the cost of housing. Compared to other western countries, Canada’s level of immigration is very high, and it is not entirely clear whether our economy has the flexibility to provide employment and business opportunities to all who start a new life here, while continuing to do so for current residents.  Economic deregulation to facilitate entrepreneurship combined with policies to encourage more immigrants to settle outside of our 3 biggest cities could mitigate some effects of this concentrated increase in housing demand.

The federal government has a number of incentive programs that encourage home ownership. These include reduced taxes, RRSP withdrawals, and mortgage insurance. It’s also possible that by setting the lending rules for mortgages that banks and creditors must follow, government policies make credit to buy a home cheaper and more available than it would be if these institutions were free to set lending policies according to market conditions. Naturally, this is a demand boost, which pushes up prices. It’s also likely that it influences multi-family home developers to prefer condominiums over rental apartments, because people who would otherwise be only in a financial position to rent a home now are able to buy due to the support of these government programs.

As far as taxes that are payable upon purchase, there is 5% GST payable on new homes, and BC assesses a property transfer tax of 1 to 3% based on the value of any home sold. There are also some new taxes the province assesses on land values, such as the school tax, speculation & vacancy tax, and the police tax, though each of them applies only to certain types of properties. Most commonly, land value taxes are assessed by municipalities. Even though these can’t be seen as part of the cost of purchasing a home, they do contribute indirectly to the cost of housing. In many cities, especially Vancouver, the property tax rates have been on the increase, even as property values have also been rising. Though taxing land values is a sensible way of providing local public services, reducing taxes on the sale of properties would certainly help make housing more affordable.

Government policy isn’t the whole story, but it’s the part we can fix

This isn’t an exhaustive list of government interventions that drive up the cost of housing. There are also factors that aren’t attributable to government that are significant cost drivers, such as BC housing being a favoured asset of money launderers, the steeply increasing premiums for insurance of multi-family buildings, and general cultural preferences for owning a home (particularly large detached ones with yards). Many factors on the demand side of the housing cost equation are very difficult to change. But on the supply side, there is a real opportunity to moderate housing prices by cutting red tape.