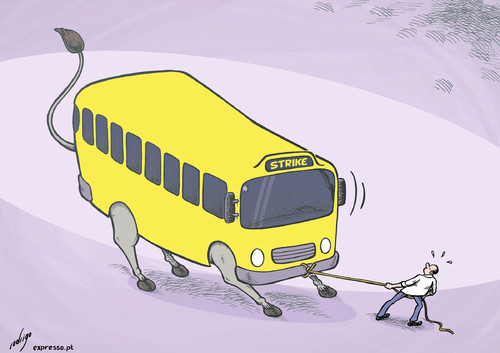 With the transit workers’ strike set to escalate this week, many people who rely on public transit will face longer commutes. While many Vancouverites sympathize with the workers’ demands for adequate break times, and wage increases commensurate with the rapid rise in cost of living, there’s a certain irony in the situation—two creatures of the state battling it out, with the public left in the lurch.

The first creature is Translink, the Authority created by the provincial government to govern and operate public transit in metro Vancouver. The other is the unions representing transit workers, which I also consider a creature of the state because it uses the coercive power of government to fund its activities; employers are legally required to collect union dues from all workers in the bargaining unit, whether they wish to be part of the union or not.

Under this arrangement, labour unrest and strikes are inevitable. Because Translink has a monopoly on public transit, there are few competitors bus drivers can switch to if they don’t like compensation Translink is offering. Because of this, the workers at one point voted to let a union represent them in negotiations with their employer.

This situation sometimes also arises in the private sector; for example among workers for the one lumber mill in a small town. In this case, there’s a factor that pressures both parties to stay at the bargaining table and avoid stoppages in work—the fact that such job action may impact the company’s sales, pushing customers towards competitors. This isn’t in the interests of either the management or workers.

However, in the case of public transit, customers do not have the option to switch to a provider other than Translink. Sure, there are other options for commuters, and these aren’t too bad if you own a car or don’t mind cycling to work in late November. Bit pity the poor souls who hoped they could rely on ride-hailing services as a commuting option, because with the licensing and level of regulation the province has imposed on this new sector, it won’t be affordable with most people who rely on public transit.

Another option which could provide relief during a transit strike is privately run inter-city bus service. However, the Passenger Transportation Board (PTB) has made this a non-starter in BC, again with a licencing and regulation scheme that heavily favours incumbents over start-ups. One such service between Surrey and UBC started up last year, but because a condition of the license was that the operator could not change any aspect of its business plan (route, stops, pick-up times, etc.), the business quickly failed. The PTB also has a process that allows public comment on new license applications, but such comments require a $50 fee! The individual commuters who would benefit from the new service would find it hard to rationalize paying $50 for the chance at getting it, whereas the existing operators would happily pay $50 to quash a new competitor.

We don’t have to look to far back in Vancouver’s history to find a time when public transit wasn’t monopolized by a government entity. And if we look outside of Canada, there are many examples of privately and publicly funded transit systems existing side by side in the same city. Tokyo’s system is particularly interesting, with its competing private and public commuter railways, that are still all accessible to passengers with a single fare card.  And privatizing transit can save taxpayers money, without necessarily reducing services.

Public transit in Vancouver (like so many other things here) is very costly compared to other cities. And as the demand for transportation continues to climb, so does the price tag for additional infrastructure, like the new Broadway SkyTrain line. According to a 2012 Ministry of Finance audit of Translink, only 33% of Translink’s revenue is from fares; the rest is from fuel and property taxes. As drivers use less gasoline, the fuel tax revenue stream will continue to decrease. Translink and Coast Mountain Bus Company also have high overhead costs compared to their peers in other cities, as evidenced by the high salaries Translink executives are paid (the CEO gets $160k more than the Prime Minister—for more on this injustice, see my blog post from earlier this year). So it looks like there’s plenty of room for Translink to make more efficient use of the taxpayer dollars it receives, but for it to become truly efficient, it will have to face real competition.

A great first step would be to eliminate the Passenger Transportation Board. This would allow more private buses from the Fraser Valley and Sea-to-Sky areas to serve those commuting to Vancouver. It would also allow ride-hailing services to operate freely. There’s probably a market for mini-bus services that offer more comfort than a packed SkyTrain car, but are less costly than a private automobile. The province should allow entrepreneurs to experiment with such services without licensing schemes that are rigged in favour of incumbents.

The main barrier to moving away from the expensive, inflexible model of public transit we currently have is that we’re stuck in the statrix (the state + the Matrix = a state of mind where citizens can’t imagine the state not providing certain public services). We need to look to our own past, to the present in other countries, and to the future of transportation promised by new technologies, and think about how we can set up a financial sustainable public transit system that has the ability to grow and adapt as Vancouver and surrounding areas grow, technologies change, and the lifestyles and preferences of Vancouverites shift.

For more on how the BC Libertarian Party is fighting to inject real competition into BC’s transportation sector, visit https://libertarian.bc.ca/issue/transport/