Float to the Future – Homesteading the World’s Oceans with Seasteading

Six years ago I was listening to a man named Joe Quirk on the Joe Rogan Experience Podcast talk about a concept called Seasteading. A couple years after that I learned about this political philosophy called libertarianism; the rest was history. To me, Seasteaders and Libertarians are a match made in heaven. You can start out as one or the other but there’s a good chance you’ll become both eventually. We share the same values, hopes and dreams. Seasteading is essentially a set of technologies that will allow us to homestead international waters and create a free market of governance. Imagine a future where we have a thousand floating micronations all competing to better serve you. Do you think we could put the 251 countries and territories recognized by the United Nations out of business? I think so.

As Canadians, more so, western Canadians, we know a thing or two about living in harsh conditions. It’s been 150 years since the west opened for mass settlement which allowed for the key industries that western Canada is still known for (like oil, mining and agriculture) to flourish. Many of us have grandparents who remember what it was like growing up in these conditions and great grandparents who were foundational in settling the west. Pioneering this land wasn’t easy; it took hardiness and a strong work ethic to rise above the treacherous climate, and ingenuity to create the foundations of a new society so far from urban centers.

Settling new parts of the world is something that human beings have been doing since the beginning of time. Historically though, land settlement hasn’t always gone great for everyone involved. Our relationships with the first nations people of Canada is still strained and most likely will be for a long time because of our history settling the west. Regardless of what anyone’s opinion is with what took place, one thing is clear; everything amazing that was accomplished from settling the west also came with pain for a lot of people. This is the first chance in history that we have to settle new parts of the world without causing pain and harm. In fact, we have a chance to restore and enrich our new environment.

The next great settlement opportunity is upon us with Seasteading, and I believe that Canadians are uniquely qualified to take advantage of it due to our strong, entrepreneurial spirit, self-reliance, hard work, and pioneering history. Companies like Ocean Builders, Blue Frontiers and Ventive Floathouse are already working hard to make Seasteading a reality. With technologies like Ocean Thermal Energy Conversion (OTEC) and solar panels for energy, farming methods like aquaculture, hydroponics, and aquaponics for food, SpaceX’s Starlink for internet, 3D printing for construction and much more, all the technologies to make it workable already exist, we just need you to take part.

You might still be wondering, what exactly is Seasteading and how can I do it? The answer to the first question is relatively simple and probably exactly what you think it is – homesteading on the ocean. In fact there are people who’re already doing this on a smaller scale, you might’ve even already done it if you’ve been on a cruise. There are approximately 314 cruise ships operating worldwide with 537,000 passengers. Cruise ships fly the flag of one country, incorporate in a different country, and dock in another. They have their own private security, private hospitals and act essentially as their own mini-nation with the captain acting as president. Some people even call cruise ships home. Cruise lines come and go as the people in the free market exercise their right to voluntarily do business with those they choose. Seasteading communities will come and go as Seasteaders exercise their right to float from one community to another as they choose.

Now, how can you do it? Right now the answer to that question is a little unclear. There’s only been one couple to semi-successfully start seasteading. I say semi-successfully because the Thai Navy decided to take it upon themselves to declare them a threat to national sovereignty so they could invade and confiscate their seastead. Luckily we have the Seasteading Institute working on helping Seasteaders and aquapreneurs (Noun: An enterprising, creative individual business person who makes a living from providing services or products to the maritime sector.) who are building floating, politically autonomous, environmentally restorative cities. We are also in the early stages of forming a Canadian Seasteading organization at Seasteading.ca which I’ll get more into later on on this article. Moving forward, what we should focus on is simply sharing these ideas, building support for seasteading and showing people what’s already possible. The truth of the matter is that it’s already been done and our version of the 10 second barrier has been broken, thanks to Chad Elwartowski and Nadia Supranee Thepdet (watch the video below to hear their story). 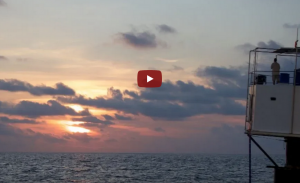 Seasteading.ca is being set up to advocate for Seasteaders in Canada. Our goal is to establish a Special Economic Zone (SEZ), preferably in the Strait of Georgia, to encourage the creation of Seastead micronations. Imagine the beacon of light we could be for the rest of the world. There’s no reason why Canada couldn’t spearhead a massive seasteading movement. After hundreds of years of archaic government institutions controlling society isn’t it time we show the world a new way? We will be able to create new political systems that we never thought of, new industries that provide wealth for the citizens, new opportunities for growth, friendships and new relationships. Seasteading startup societies will set us free.

“A startup society is typically a small territorial experiment in government. For centuries, innovators have created enclaves to escape institutional barriers. America itself was created to escape religious persecution in Europe. The startup societies of today are making the world into a more diverse and competitive place.”

Startup societies are much like businesses. They’re small, experimental and often focused on technology. People are dissatisfied with their governments around the world because they’re difficult and slow to change due to their large size and centralization of power. Special interest groups often get involved to sway policy decisions that impede change. Seasteaders want to approach governance from a scientific perspective and proper science requires a large enough sample size to create meaningful examples to draw from. With large, centralized government institutions there’s less precedent to make policy predictions because the government has no incentive to do so. In short, to governments we are tax slaves, to seasteads we are customers. Because startup societies are small and decentralized they create more diverse policy examples so that policy makers can implement changes based on richer data sets.

As Libertarians our initial reaction to those that disagree with us is often to argue policy, philosophy, and the practicality of our ideas. As Seasteaders, our reaction is quite the opposite. We have a motto, “Stop arguing. Start seasteading.” As Seasteaders we’re confident with our ideas, so confident that we’re past the point of arguing, I think Libertarians should adopt the same mindset. Seasteading gives us the opportunity to work together and test out our ideas. We’re past the point of arguing and convincing, it’s time to show people what we’re all about. To me, libertarianism is about respecting the rights and property of the people around you, working hard, being free, and having fun. We understand free speech, freedom of association, voluntarism, non-aggression and free markets. We have a vision for the future of society and we know how to achieve it. It’s time to make it a reality. 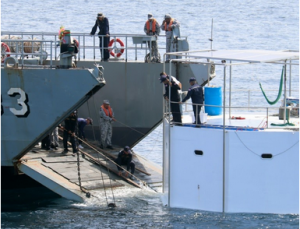 What if we could use seasteads instead of voting to show governments what we want? Once countries start losing their tax base they’ll be forced to evolve with the times or go bankrupt just like a business would. Once people are no longer confined to the nation of their birth, or any land-based state, countries will have an interest in becoming host nations for Seasteaders. The creation of Seasteading SEZ’s within a country’s territorial waters could open up economic opportunities that could enrich people and countries around the world.

The Seasteading Institute has been instrumental in pushing forward international projects. We want to show Canadians what’s truly possible and give people a hope for the future. Our long term goals are to move outward to international waters to begin seasteading there with TSI’s help. If seasteading sounds even remotely interesting to you please head over to Seasteading.ca to subscribe to our email list where we’ll be providing updates to our supporters. Do keep in mind though that we’re still in the early phases of forming the organization so the website is currently unfinished. We also have a Facebook page you can like and a group to join.

So get excited, tell your friends and tell your family the seasteading is real and it’s here. If we work together we can create a better future for each and everyone of us that we can’t even begin to wrap our heads around. Seasteading will create new inventions, pioneers and stories. It’ll provide us a new way of life and hope for ourselves, our friends and family members. It’ll create new industries and opportunities for wealth creation. We’ll be able to clean our oceans with environmentally restorative methods. The developments we make now will allow for the next generations to be more prosperous in the future. Life will change as we know it and all we need to do is float.

For anyone looking to ask questions or find out how they can help you can email [email protected] or visit the website and submit your email there.