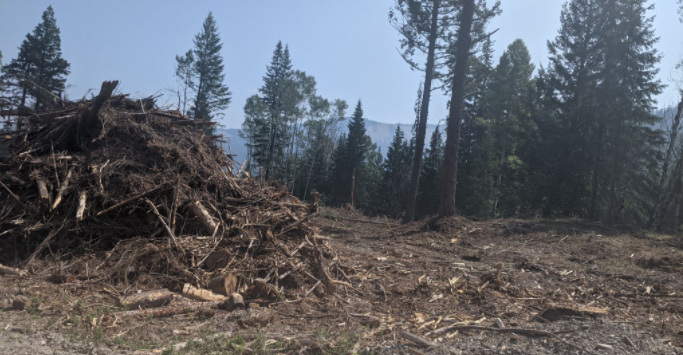 I live in this Interior Riding and I know some of the candidates quite well. I take issue with the NDP continually blaming the wildfires on climate change. As Alex Epstein said “If your house catches on fire, it’s not because you set the thermostat one degree too high, it’s because you have bad fire prevention practices. The cause of dangerous wildfires is not the one degree of global warming in the last 150 years–it is bad, “green” forest management.”  Decades of mismanagement in forestry, horrible procurement practices by the NDP government, ignoring recommendations for the years they’ve been in power and a centralized approach to decision-making are much bigger factors.

Decades of human intervention suppressing wildfires is a major factor and is now causing a fury of wildfire storms to finally catch up to us. Researchers from UBC used dendrochronology to determine that dry Douglas-fir forests had an average burn cycle of 10-30 years which burned at moderate to low severity. We have now extended that to 70-180 year fire frequencies and then blame the invisible gases in the air when these fires eventually burn long and hot due to the tripled fuel load.

What is the obvious way to mitigate this increased fuel load? Prescribed burning or selective logging to thin the understory would be the easy choices if the government hadn’t bogged foresters down with regulatory burdens. It takes well over a year to plan a small prescribed burn for the purpose of wildfire risk mitigation. These planned burns need to be overseen by a “burn boss” who must be certified in a process that is almost impossible to complete. In early 2021 there was only 1 Burn Boss for the entire Kamloops Fire Zone.

It is currently illegal to pick up firewood and kindling within the boundaries of a provincial park, and as these areas are never logged or grazed the understory becomes a pyromaniacs dream. If the 3-4 million campers that moved through BC parks could help to gather and burn the deadfall in these parks, which are often not far from cities and towns, then that danger could be mitigated.

There was a structure suppression unit 20 minutes away from the Monte Lake fire that was never called in and sat idle while houses burned. $500 million was spent this wildfire season which the NDP are now using as a reason to appropriate more taxpayer money.  Why give them more when they haven’t used the money they already have wisely?

The NDP’s and the Horgan government are very good at blaming their problems on climate change.  During the heatwave at the end of June and early July they did not end pandemic restrictions a few days early, they did not activate the Emergency Operations plan, they did not increase 911 operators, and paramedics were at home wishing they could be called in.  Horgan’s response? “Get some cold cloths.” “We knew it was going to be hot, we didn’t know it was going to be dangerous.” “Fatalities are a part of life.” “But it was apparent to anyone who walked outdoors that we were in an unprecedented heatwave and again, there’s a level of personal responsibility.”

There are only a few possible explanations for the disasters this summer.  The centralized approach of NDP governments causes poor decision-making, there is extreme incompetence in government, or perhaps, a bad fire season works well for Horgan’s climate change agenda.