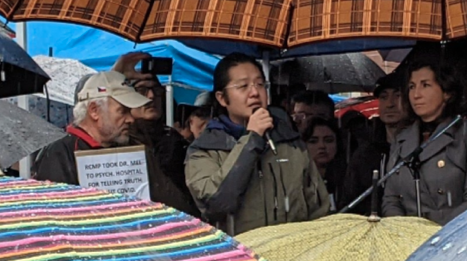 The following is based on statements by Dr. Daniel Nagase and Dr. Mel Bruchet at a rally in North Vancouver on Dec 12.

Dr. Mel Bruchet, a retired North Vancouver physician, was involuntarily committed earlier this week under the BC Mental Health Act. Dr. Bruchet became the subject of controversy after a Nov 11th rally at the North Vancouver RCMP detachment where he relayed reports that during a 24 hour period in September, there were 13 stillbirths at BC Women’s Hospital. Vancouver Coastal Health denied the claims in a series of tweets, stating that there has been no increase in stillbirths, and that “COVID-19 vaccines are safe and recommended for both mother and fetus.”

The panicked provincial authorities, who were quick to label Dr. Bruchet’s statements “disinformation”, may have been looking for an opportunity to silence him. Dr. Bruchet called the police when his downstairs tenant was playing very loud music and would not respond to requests to decrease the volume. When the RCMP arrived, instead of dealing with the tenant, they took Dr. Bruchet into custody, and transported him to Lions Gate Hospital. The psychiatric doctor there claimed that Dr. Bruchet was possibly suffering from dementia, and had him committed.

The BC Mental Health Act gives physicians the power to have someone involuntarily committed if they are perceived to be a danger to themselves or others. However, certain criteria must be met, and page 190 of the official guide to the Act provides a Crisis Triage Rating Scale with rages of behaviour to guide physicians in their decision on whether involuntary commitment is appropriate. Dr. Bruchet is 80 years old but has a high level of mental acuity, as would be evident to anyone who listens to him speak for a minute or two. He doesn’t exhibit any signs of dementia, and appears to be in good mental health, so it is very difficult to believe that a physician would have deemed this elderly man to be so unstable and dangerous that he had to be confined to a psych ward.

During the three days that Dr. Bruchet was confined to the hospital, his mobile phone was taken from him and he was not allowed visitors. He was also given antipsychotic medication against his will. Dr. Daniel Nagase, a friend of Dr. Bruchet, made many attempts to visit Dr. Bruchet, but was refused. Finally Dr. Nagase was able to get through to the physician in charge of the ward at LGH, and Dr. Bruchet was released this morning.

We call on independent journalists to investigate this story to find out whether the arrest of Dr. Bruchet may have been politically motivated. As longtime civil liberties advocates, the BC Libertarian Party is deeply troubled by the possibility that a person, particularly someone with 50 years of experience as a physician, would be isolated in a facility against his will for expressing a point of view contrary to the government’s. When political dissent is labeled as “mental illness” and dissidents are imprisoned, the scope for tyranny expands greatly.

While the BC Libertarian Party believes that the powers of the Act are overly broad as currently written and should be scaled back, we believe that if individual doctors are allowed to use the Act as a weapon to silence critics, British Columbia has taken a large step towards authoritarianism. If the Act has been misused, we strongly urge that the individuals involved be held accountable. 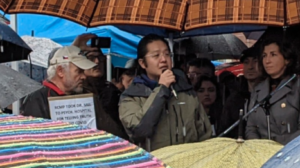 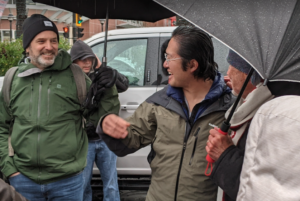